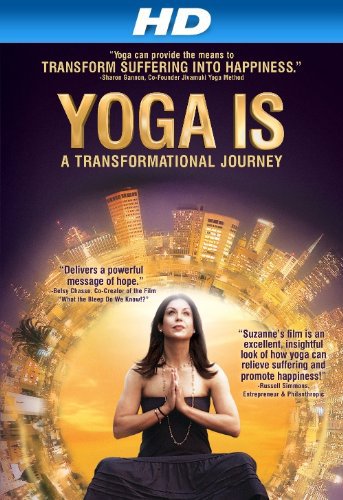 Thirty million Americans and countless millions worldwide have taken up a practice that is transforming their lives. Follow filmmaker Suzanne Bryant as she meets with the most prominent Yoga Gurus and teachers in the west and travels to India to explore the power of this ancient practice. Along the way she discovers what YOGA IS.

This is the story of a woman who thought she had it all …until she lost her beloved mother to cancer. Trying to process and understand her profound grief, Suzanne embarked on a journey and turned to a deeper practice of yoga.

Suzanne’s journey led her to India on a spiritual quest to learn more about this powerful ancient practice. She studied yoga and Ayurveda in Kerala, Ashtanga Yoga with Pattabhis Jois and his daughter Saraswati, met with Guru Neem Karoli Baba’s son in Vrindavan to learn about Bhakti yoga and came face to face with a near death experience herself. While in India, something had shifted within her, the light had returned.

Inspired by her experience in India, she returned back to the U.S. to explore what yoga means to the West and how it can transform lives. Suzanne met with the most prominent western Yoga Gurus and teachers as well as celebrity yoga devotees Russell Simmons, Christy Turlington, musician Michael Franti and Buddhist scholar Robert Thurman in search for the answers that unite us all. Answers to questions such as Love, Truth, Happiness, Purpose, The Now, our Dark and Light , Empowerment, Karma, Enlightenment, Transformation and so much more. What she found was something wonderful: a path that can enable anyone to transform suffering and experience daily peace and happiness.

“Yoga Is: A Transformational Journey is the first yoga-based documentary to be distributed by a major motion picture company, after having been shown at screenings and festivals nationally and internationally for over a year to applauded reviews.” – Derek Beres, Huffington Post

“Bryant spoke to yoga teachers all around the world from Los Angeles to New York City to India about what makes yoga a transformational journey, and the result is a powerful and inspiring story of how yoga offers all of us meaning in our lives when we need it most.” – Jesus Manuel Rojas Torres, Examiner