You are here: Home / Detox / Documentary: The Human Experiment 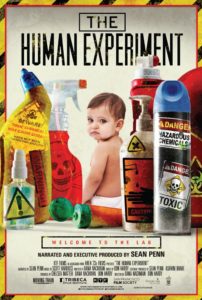 The Human Experiment lifts the veil on the shocking reality that thousands of untested chemicals are in our everyday products, our homes and inside of us. Simultaneously, the prevalence of many diseases continues to rise. From Oscar® winner Sean Penn and Emmy® winning journalists Dana Nachman and Don Hardy, The Human Experiment tells the personal stories of people who believe their lives have been affected by chemicals and takes viewers to the front lines as activists go head-to-head with the powerful and well-funded chemical industry. These activists bring to light a corrupt system that’s been hidden from consumers… until now.

“The film, narrated by the activist actor [Sean Penn], explores the dangers in household products and is directed by Dana Nachman and Don Hardy Jr.” – Rebecca Ford, The Hollywood Reporter

“I haven’t seen Sean Penn’s offering, The Human Experiment, which promises premiere information coming soon. But I’m loving the tagline, ‘Welcome to the lab,’ as I do agree with the idea that corporate America has gone with an ‘innocent until proven guilty’ premise when it comes to toxic chemicals.” – Rachel Lincoln Sarnoff, Huffington Post