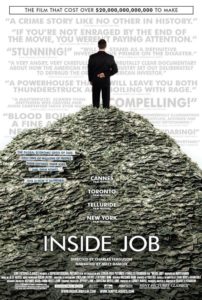 From Academy Award® nominated filmmaker, Charles Ferguson (No End In Sight), comes INSIDE JOB, the first film to expose the shocking truth behind the economic crisis of 2008. The global financial meltdown, at a cost of over $20 trillion, resulted in millions of people losing their homes and jobs. Through extensive research and interviews with major financial insiders, politicians and journalists, INSIDE JOB traces the rise of a rogue industry and unveils the corrosive relationships which have corrupted politics, regulation and academia.

“It’s a powerhouse of a documentary that will leave you both thunderstruck and boiling with rage. This film lays out in exceptional, but always understandable detail the argument that the meltdown of 2008 was ‘not an accident’. Because of his personal and professional background, his intelligence and his inclinations, Ferguson is especially well-suited to creating knockout documentaries that cogently and carefully lay out all the particulars of a significant situation.” – Kenneth Turan, Los Angeles Times

“If you’re not enraged by the end of the movie, you weren’t paying attention. A cogent synopsis of the decisions that led to the Wall Street bubble and collapse….the larger message of INSIDE JOB is that American optimism can also have tragic consequences.” – Mary and Richard Corliss, TIME