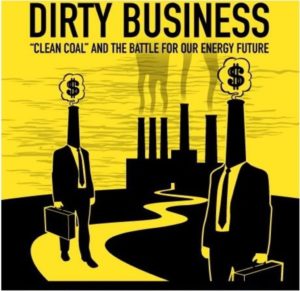 DIRTY BUSINESS: “Clean Coal” and the Battle for Our Energy Future is a 90-minute documentary produced by the Center for Investigative Reporting that investigates the true cost of our dependence on coal for electricity in the age of climate change. Politicians and corporate interests have mounted a formidable public relations campaign promoting “clean coal” as a solution to our energy/climate problem. Despite major concerns on the part of scientists and environmental groups, there has been little public education about this issue, which was a high-profile topic of the 2008 presidential campaigns and is a central element of President Obama’s energy policy.

Can coal ever really be made “clean”? If we were to try to wean ourselves off coal, how would we keep the lights on? Is renewable energy ready for prime time? Guided by Rolling Stone reporter Jeff Goodell, DIRTY BUSINESS seeks answers in a series of stories: citizens fighting to build a solar power plant instead of a new coal plant in Nevada; a Kansas cowboy saving his cattle ranch with wind power; doctors tabulating the true cost of coal pollution in the damaged health of newborns in China, where a new coal plant goes up every week; innovators making a southern Rust Belt factory so energy efficient that it will steal jobs back from China.

America burns more than a billion tons of coal a year—and coal-fired power plants are the single greatest source of the greenhouse gases that cause global warming. Many of us are not aware that even now, in a world globally connected by the Internet, half our electricity still comes from this dirty, nineteenth century technology. DIRTY BUSINESS investigates the coal lobby’s $40 million dollar campaign to convince us that the technology to make coal “clean” already exists. In fact, that technology—called “carbon capture and storage”—is not in full commercial operation anywhere in the world, and experts say that may not happen for 15 years or more, and even then may not be economically viable.

DIRTY BUSINESS is the first major public media project to explain and demystify “clean coal” and to explore the extent to which increased energy efficiency and renewable energy sources such as wind and solar thermal power might make “clean coal” unnecessary and uneconomical.

“Dirty Business does an excellent job of explaining that, while removing carbon dioxide from coal emissions is technically possible, it is a project of such vast proportions that it is unlikely to be successful in the long run…The fact that the coal industry can spend millions of dollars on advertising and that there is no equivalent counter weight to the self-serving misinformation being distributed is a very significant factor in the energy debate.” – Dr. Kyle Forinash, Professor, Department of Natural Sciences, Indiana University Southeast, Author, Foundations of Environmental Physics: Understanding Energy Use and Human Impacts

“Dirty Business provides a comprehensive look at the pervasive presence of fossil fuels and electrical power in all aspects of modern life…[and] demonstrates how the concentrated power of the coal industry holds us all hostage at a time when we need to be seeking innovative, sustainable energy alternatives, including increased efficiency, wind, solar and even recycled heat from already existing manufacturing plants.” – Rebecca Scott, Assistant Professor, Department of Sociology, University of Missouri-Columbia, Author, Removing Mountains: Extracting Nature and Identity in the Appalachian Coalfields