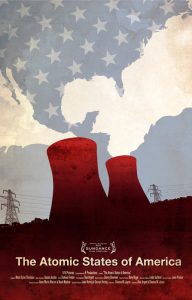 In 2010, the United States announced the first new nuclear power plant construction in over 32 years. The ‘Nuclear Renaissance’ was born, and America’s long-stalled expansion of nuclear energy was infused with new life. On March 11, 2011, a 9.0 magnitude earthquake hit Japan and caused chaos at the Fukushima Power Plant. That accident sent ripples all the way to the US and suddenly the fierce debate over the safety and viability of nuclear power was back in the public consciousness. Our documentary takes the viewer on a journey to reactor communities around the country. This film exposes the truths and myths of nuclear power, and poses the question of whether or not man can responsibly split the atom.

“Located at the intersection of U.S. nuclear amnesia and the 2011 meltdown of the Fukushima plant in Japan, The Atomic States of America takes a fairly objective approach to an emotionally volatile topic, offering an examination of nuclear power that could convince its supporters to think otherwise.” – John Anderson, Variety

“Featuring an array of scientists, locals, government leaders and Alec Baldwin at his salivating best, The Atomic States of America calls attention to the potential for nuclear disaster at [sites like Park City].” – Duane Byrge, The Hollywood Reporter

« Documentary: If a Tree Falls
The Best Way Choose a Detox Program »