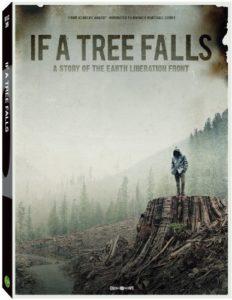 In December 2005, Daniel McGowan was arrested by Federal agents in a nationwide sweep of radical environmentalists involved with the Earth Liberation Front — a group the FBI has called America’s “number one domestic terrorism threat.”

For years, the ELF — operating in separate anonymous cells without any central leadership—had launched spectacular arsons against dozens of businesses they accused of destroying the environment: timber companies, SUV dealerships, wild horse slaughterhouses, and a $12 million ski lodge at Vail, Colorado.

With the arrest of Daniel and thirteen others, the government had cracked what was probably the largest ELF cell in America and brought down the group responsible for the very first ELF arsons in this country.

IF A TREE FALLS: A STORY OF THE EARTH LIBERATION FRONT tells the remarkable story of the rise and fall of this ELF cell, by focusing on the transformation and radicalization of one of its members.

Part coming-of-age tale, part cops-and-robbers thriller, the film interweaves a verite chronicle of Daniel on house arrest as he faces life in prison, with a dramatic recounting of the events that led to his involvement with the group. And along the way it asks hard questions about environmentalism, activism, and the way we define terrorism.

Drawing from striking archival footage — much of it never before seen — and intimate interviews with ELF members, and with the prosecutor and detective who were chasing them, IF A TREE FALLS explores the tumultuous period from 1995 until early 2001 when environmentalists were clashing with timber companies and law enforcement, and the word “terrorism” had not yet been altered by 9/11.

“If a Tree Falls is a personal story that doesn’t strive to be a comprehensive history of the Earth Liberation Front. According to the film, the cell in which Mr. McGowan operated as a prime mover crumbled amid heated debate about whether to cross the line into physical violence and go after captains of industry. Today autonomous, anonymous cells of the front still operate, although with much less frequency.” – Stephen Holden, New York Times

“The film tells the story of the rise of the Earth Liberation Front in the Pacific Northwest, in the late nineties and early aughts. In particular, it focuses on Daniel McGowan, a young New Yorker who gets introduced to radical politics, travels to Oregon, and becomes a leading figure in the now-infamous ELF–and is eventually tried and convicted as a terrorist for his role in two arsons.” – Brian Merchant, Treehugger

« How to Make Superfood Milk in Seconds
Documentary: The Atomic States of America »