You are here: Home / Detox / Documentary: Fed Up 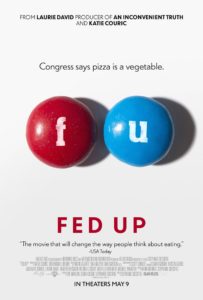 Everything we’ve been told about food and exercise for the past 30 years is dead wrong. FED UP is the film the food industry doesn’t want you to see. From Katie Couric, Laurie David (Oscar winning producer of AN INCONVENIENT TRUTH) and director Stephanie Soechtig, FED UP will change the way you eat forever.

“According to the film, added sugar, in all forms — including not just the demonized high-fructose corn syrup, but also more natural-sounding throwbacks such as ‘pure’ cane sugar — is almost single-handedly responsible for what one interview subject calls the obesity tsunami sweeping the nation, as well as the sharp rise in diabetes.” – Michael O’Sullivan, The Washington Post

“Three years in the making, with the celebrity journalist Katie Couric serving as producer and narrator, Fed Up chronicles the lives of several young people who struggle with obesity while intercutting an impressive roster of talking heads — all of whom support the argument that the food industry is knowingly endangering the American people.” – Robert Cameron Fowler, IndieWire