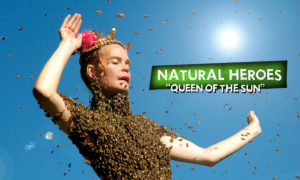 QUEEN OF THE SUN: What Are the Bees Telling Us? is a profound, alternative look at the global bee crisis from Taggart Siegel, director of THE REAL DIRT ON FARMER JOHN. Taking us on a journey through the catastrophic disappearance of bees and the mysterious world of the beehive, this engaging and ultimately uplifting film weaves an unusual and dramatic story of the heartfelt struggles of beekeepers, scientists and philosophers from around the world including Michael Pollan, Gunther Hauk and Vandana Shiva. Together they reveal both the problems and the solutions in renewing a culture in balance with nature.

“Pointing the finger at pesticides, single-crop farming (requiring that the tiny creatures be forcibly shuttled around the country for pollination) and the industrialization of beekeeping itself (including inbreeding and injections of high-fructose corn syrup), Queen of the Sun offers a glimpse into imminent beepocalypse.” – Jeannette Catsoulis, New York Times

“This [information about bee pollination and the disappearance of bees] I have learned from Taggart Siegel’s Queen of the Sun: What Are the Bees Telling Us? a remarkable documentary that’s also one of the most beautiful nature films I’ve seen.” – Roger Ebert