Provoking, witty, stylish and sweepingly informative, The Corporation explores the nature and spectacular rise of the dominant institution of our time. Part film and part movement, The Corporation has been transforming audiences and dazzling critics with its insightful and compelling analysis for over 10 years. 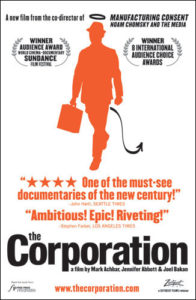 Taking its status as a legal “person” to the logical conclusion, the film puts the corporation on the psychiatrist’s couch to ask “What kind of person is it?” The Corporation includes interviews with 40 corporate insiders and critics – including:

– plus true confessions, case studies and strategies for change.

The film is based on the book The Corporation: The Pathological Pursuit of Profit and Power by Joel Bakan.

“This smart, informative and lively polemic makes a strong case for viewing the corporation–which enjoys the legal status of an individual–as a psychopath run amok.” – Newsweek, David Ansen

“The rare movie that sets out to alter the audience’s consciousness — and succeeds.” – Houston Chronicle,  Eric Harrison

“Everything you do and think either adds to the vitality, energy, and spirit you possess or takes away from it.” -Ann Wigmore Words of wisdom for 2020. Shine on! #holistic #healthyfood #gratitude #wellness #healthytips #mindfulness #AvalonCleanse #EatClean #FitnessGoals #detox