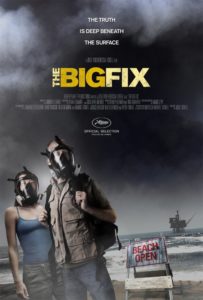 A documentary that examines the April 2010 oil spill in the Gulf of Mexico following the sinking of the Deepwater Horizon oil rig.

“The Big Fix is an enraged exposé of the crimes of Big Oil, specifically BP, which has been accused of negligence and of taking shortcuts that helped lead to the explosion of the Deepwater Horizon rig off the Louisiana coast in April 2010. Eleven workers on the platform died and nearly five million barrels of oil spilled into the Gulf of Mexico over the next five months, killing vast numbers of marine animals before much of it washed ashore, where it wrought incalculable damage.” – Stephen Holden, New York Times

“In fact, the bottom line message from this well-documented film, produced and directed by Josh Tickell and Rebecca Harrell-Tickell, is that the BP oil spill in the Gulf never went away and the oil is still spilling. And to top it off, the chemical dispersant, Corexit, which is still being used to clean up the oil, is an extremely toxic substance. The film reports that Corexit is wreaking havoc on the health of the people and marine life in the Gulf.” – Paul E. McGinnis, EcoWatch

« 3 Ways to Feel Positive and Present
Short Film: The Story of Cosmetics »