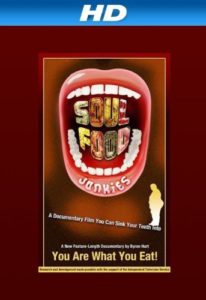 Both of his parents are from Milledgeville, Georgia, a small southern town. It’s a place where soul food is beloved by black and white folks alike. Soul food is a long held culinary tradition passed down from generation to generation, and is a source of pride for many black people. Some soul food, depending on how it is prepared, can be good for you. But when it is cooked with lots of fat, sugar, and salt — which is often the case — it can lead to obesity and other health issues.

Hurt can speak from personal experience. From his earliest memories, his father was overweight, his mom the soul food chef. As an adult, growing concern about his father’s health prompted Hurt to confront him about his eating habits, but to no avail. Eventually, his father made small changes to his diet and began to exercise more, but the changes came too late in his life. In 2004, doctors diagnosed him with terminal pancreatic cancer, a virulent disease that disproportionately affects black people. Statistically, black Americans are more likely to die of the disease than whites; figures for 2001 to 2005 from the National Cancer Institute show that blacks had a 32 percent higher death rate. One of the risk factors for developing pancreatic cancer is a high fat, meat-based diet. Hurt’s father died in 2007 at the young age of 63. This is sadly a common story in the lives of many African American families in the U.S. — losing loved ones too soon from a nutrition-related illness.

In Soul Food Junkies, Hurt sets out on a historical and culinary journey to learn more about the soul food tradition and its relevance to black cultural identity. Through candid interviews with soul food cooks, historians, and scholars, as well as with doctors, family members, and everyday people, the film puts this culinary tradition under the microscope to examine both its positive and negative consequences. Hurt also explores the socioeconomic conditions in predominantly black neighborhoods, where it can be difficult to find healthy options, and meets some pioneers in the emerging food justice movement who are challenging the food industry, encouraging communities to “go back to the land” by creating sustainable and eco-friendly gardens, advocating for healthier options in local supermarkets, supporting local farmers’ markets, avoiding highly processed fast foods, and cooking healthier versions of traditional soul food.

“Mr. Hurt’s nuanced documentary, woven into his personal narrative, reveals not only the impact of black cuisine on African Americans, but its impact on Southern cooking and on the way many of us relate to food. He manages to accomplish all of this with painful honesty, warm humor and deep respect.” – Eric Holt Gimenez, Huffington Post

“The film is an eye-opener in so many ways[…]It’s real and it forces the issues surrounding health and wellness amongst African Americans.” – Christine St. Vil, Black and Married With Kids