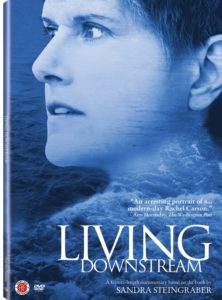 Based on the acclaimed book by ecologist and cancer survivor Sandra Steingraber, Ph.D., Living Downstream is an eloquent and cinematic documentary film.

This poetic film follows Sandra during one pivotal year as she travels across North America, working to break the silence about cancer and its environmental links. After a routine cancer screening, Sandra receives some worrying results and is thrust into a period of medical uncertainty. Thus, we begin two journeys with Sandra: her private struggles with cancer and her public quest to bring attention to the urgent human rights issue of cancer prevention.

But Sandra is not the only one who is on a journey—the chemicals against which she is fighting are also on the move. We follow these invisible toxins as they migrate to some of the most beautiful places in North America. We see how these chemicals enter our bodies and how, once inside, scientists believe they may be working to cause cancer.

Several experts in the fields of toxicology and cancer research make important cameo appearances in the film, highlighting their own findings on two pervasive chemicals: atrazine, one of the most widely used herbicides in the world, and the industrial compounds, polychlorinated biphenyls (PCBs). Their work further illuminates the significant connection between a healthy environment and human health.

At once Sandra’s personal journey and her scientific exploration, Living Downstream is a powerful reminder of the intimate connection between the health of our bodies and the health of our air, land, and water.

“The film weaves in scientific research and interviews with several experts in the fields of toxicology and medicine along with the personal story of Steingraber’s struggle with bladder cancer.” – Annie Spiegelman, The Huffington Post

“Sandra’s deeply personal exploration of her cancer and her journey across the continent shedding light on the environment coincide to produce this wonderful film that emphasizes the importance of a healthy land.” – Kirsten E. Silven, Earth Times