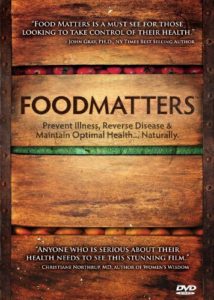 That is the message from the founding father of modern medicine echoed in this brave new documentary film brought to you by Producer-Directors James Colquhoun and Laurentine ten Bosch. Food Matters is a hard hitting, fast paced look at our current state of health. Despite the billions of dollars of funding and research into new so-called cures we continue to suffer from a raft of chronic ills and every day maladies. Patching up an over-toxic and over-indulgent population with a host of toxic therapies and nutrient sparse foods is definitely not helping the situation.

In a personal quest of discovery James and Laurentine together with a film crew and the editorial and production expertise of Enzo Tedeschi have set out on an independent mission to uncover the wholesome truth. The filmmakers have interviewed several world leaders in nutrition and natural healing who claim that not only are we harming our bodies with improper nutrition, but that the right kind of foods, supplements and detoxification can be used to treat chronic illnesses as fatal as terminally diagnosed cancer. Food Matters seeks to uncover the business of disease and at the same time explore the safe, cheap and effective use of nutrition and supplementation for preventing and often reversing the underlying causative aspects of the illness. With the premise of the film being: access to solid information helps people invariably make better choices for their health. The Food Matters duo have independently funded the film from start to finish in order to remain as unbiased as possible, delivering a clear and concise message to the world. Food Matters.

“I pretty much hang on every line of Food Matters. I love the discussion of vitamins and the vital role they can play in helping fight illness at various quantities.” – Kristen Suzanne, Kristen’s Raw, Vegan, Paleo & More