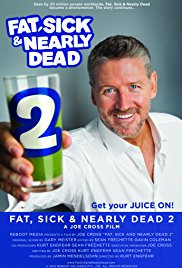 What began as the story of one man, is now a story about millions.

After the film Fat, Sick & Nearly Dead documented his 60 day juice fast, Joe Cross vowed never to go on camera again. Since then, more than 20 million people have seen the film and Joe realized there’s still a lot for him to learn about becoming healthy and staying that way.  Fat, Sick & Nearly Dead 2 taps into the tsunami of positive change that’s sweeping the world when it comes to what we eat.

As Joe sets out to learn how to be healthy in an unhealthy world, he talks to a wide range of experts, follows up with folks from the first film, and connects with new people along the way.  Each one helps Joe learn that healthy eating is only one aspect of living a healthy life.  From stay-at-home moms to world-class surgeons to office workers in Kenya, it seems like everyone is trying to be healthier, yet struggling to do so.

While on the road, Joe experiences some ups and downs when it comes to managing his own weight.  Joe’s food battles resemble those of the everyday people he meets on his journey. Mirroring Joe’s story is a series of testimonial videos submitted by people who saw the first film; their personal, intimate and often funny stories show that wanting to change is often easier than actually doing so.

Top cardiologist Dean Ornish catches Joe by surprise when he explains that community is one of the most powerful forces in shaping a person’s health.  Joe finds out how true this really is when he catches up with Phil Staples, the truck-driver from the first film.  Five years on, Phil is on his own journey with varying levels of support and is dealing with his own set of ups and downs.  It’s Phil’s experience that shows Joe just how big of an impact community can have.

Through Joe’s journey and the lives of the people he meets, Joe shows us in Fat Sick & Nearly Dead 2 that most people really do have control over of their health, even if they never knew it was possible. And that the final decision about what to put in your mouth, is what Joe calls, “The last two feet of freedom.”

Watch the movie trailer here for Fat, Sick & Nearly Dead 2 – Get Your Juice On!