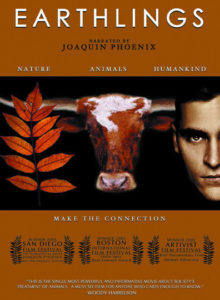 Earthlings is a 2005 American documentary film about humankind’s total dependence on animals for economic purposes. Presented in five chapters (pets, food, clothing, entertainment and scientific research) the film is narrated by Joaquin Phoenix, featuring music by Moby, and was written, produced and directed by Shaun Monson.

“If I could make everyone in the world see one film, I’d make them see Earthlings.” – Peter Singer, author of Animal Liberation

“Earthlings is The Passion of the Christ of animal rights films.” – Ain’t It Cool News