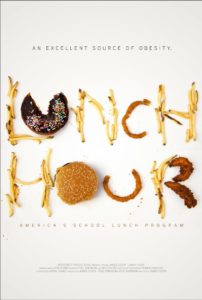 Is this the root of the childhood obesity crisis?

What is causing us to lust for these unhealthy foods?

Have we unconsciously decided to ignore this situation and accept an unhealthy diet as the social norm?

School officials, politicians, doctors, celebrity chefs, authors, and others share what they’re doing to problem solve this predicament and help save the children of America. Additionally, a USA Today investigative journalist shares facts based on many in depth investigations done by the newspaper, where shocking information is revealed about what food grade our next generation is eating on a daily basis.

“Following in the activist tradition of such Participant Media films as An Inconvenient Truth and Waiting for Superman, James Costa’s documentary Lunch Hour seeks to wake up viewers to the national epidemic of unhealthy eating and how the school lunch program is creating a new generation of overweight, diabetic and otherwise overfed and undernourished kids.” – Michael O’Sullivan, Stephanie Merry and Ann Hornaday, The Washington Post

“In his new documentary Lunch Hour, director James Costa’s cri de coeur about school lunch is not accompanied by slaughterhouse footage worthy of Upton Sinclair—though given schools’ dependence on so-called ‘factory farms,’ it certainly could. Instead, some of its most unsettling visuals show a typical fluorescent-lit day in the cafeteria, where many kids pass on the nutrition-poor offerings. Many U.S. schools, his film points out, spend as little as 90 cents per meal.” – Dade Hayes, Forbes