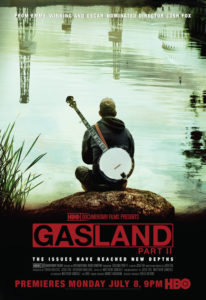 In this explosive follow-up to his Oscar®-nominated film GASLAND, filmmaker Josh Fox uses his trademark dark humor to take a deeper, broader look at the dangers of hydraulic fracturing, or fracking, the controversial method of extracting natural gas and oil, now occurring on a global level (in 32 countries worldwide).

GASLAND PART II, which premiered at the 2013 Tribeca Film Festival, shows how the stakes have been raised on all sides in one of the most important environmental issues facing our nation today. The film argues that the gas industry’s portrayal of natural gas as a clean and safe alternative to oil is a myth and that fracked wells inevitably leak over time, contaminating water and air, hurting families, and endangering the earth’s climate with the potent greenhouse gas, methane. In addition the film looks at how the powerful oil and gas industries are in Fox’s words “contaminating our democracy.”

“What happens when people come to your backyard and start destroying everything you loved about it and it seems like everyone has turned their back on you? Director Josh Fox explores that scenario in his documentary, Gasland II, sequel to his first documentary, Gasland.” –The Examiner

“Most people will have to wait to see the film until the summer, when HBO will air it, but Gasland Part II doesn’t report much that will be new to anyone who’s been following the fracking fight. What it does show is how that fight has changed and how high the stakes have become for those in it. At this point, with both sides dug in, Gasland Part II probably won’t create as many new recruits as its predecessor. But it could inspire fracking opponents to fight harder and take more risks.” – Sarah Lasknow, Grist