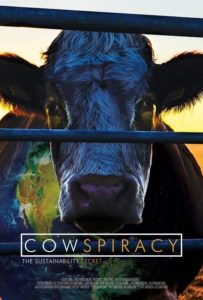 Cowspiracy: The Sustainability Secret is a groundbreaking feature-length environmental documentary following intrepid filmmaker Kip Andersen as he uncovers the most destructive industry facing the planet today – and investigates why the world’s leading environmental organizations are too afraid to talk about it.

Animal agriculture is the leading cause of deforestation, water consumption and pollution, is responsible for more greenhouse gases than the transportation industry, and is a primary driver of rainforest destruction, species extinction, habitat loss, topsoil erosion, ocean “dead zones,” and virtually every other environmental ill. Yet it goes on, almost entirely unchallenged.

As Andersen approaches leaders in the environmental movement, he increasingly uncovers what appears to be an intentional refusal to discuss the issue of animal agriculture, while industry whistleblowers and watchdogs warn him of the risks to his freedom and even his life if he dares to persist.

As eye-opening as Blackfish and as inspiring as An Inconvenient Truth, this shocking yet humorous documentary reveals the absolutely devastating environmental impact large-scale factory farming has on our planet, and offers a path to global sustainability for a growing population.

“Fear not, [Cowspiracy] is no attempt to shock and shame you into renouncing sin by exposing you to grainy, covert footage of sickly chickens being sucked into a giant mincer. To start with it is a masterclass in documentary film making. Deft pacing, a dry sense of humour and a self-effacing protagonist make it eminently watchable. There’s an engaging simplicity to the narrative and data presentation which is supported by simple but beautiful cinematography.” – Nick Figgis, The London Economic

“[Cowspiracy] goes far beyond the obvious impacts of livestock production such as overgrazing of rangelands, and talks about everything from water pollution (from manure) to energy use in the production of meat to the mistreatment of meat-producing animals by humans. Overall it makes a very cogent and articulate argument against meat/dairy consumption.” – George Wuerthner, The Wildlife News