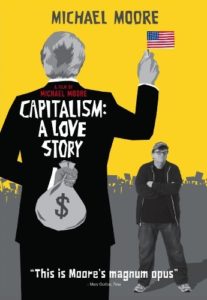 examines the impact of corporate dominance on the everyday lives of Americans (and by default, the rest of the world). The film moves from Middle America, to the halls of power in Washington, to the global financial epicenter in Manhattan. With both humor and outrage, the film explores the question: What is the price that America pays for its love of capitalism? Families pay the price with their jobs, their homes and their savings. Moore goes into the homes of ordinary people whose lives have been turned upside down; and he goes looking for explanations in Washington, DC and elsewhere. What he finds are the all-too-familiar symptoms of a love affair gone astray: lies, abuse, betrayal…and 14,000 jobs being lost every day. Capitalism: A Love Story also presents what a more hopeful future could look like. Who are we and why do we behave the way that we do?

“The film is most effective when it explains or reveals these outrages [which are two revelations: that there are ‘dead peasant insurance’ policies, that pay companies when their workers die, and ‘derivatives,’ which are bets placed on the expectations that people will default on their mortgages].” – Roger Ebert

“Michael Moore’s Capitalism: A Love Story is anything but — something you, I and everyone who has ever watched him shamble into action, megaphone to mouth, know from the start. He might have had a crush on capitalism early on, yet anyone who thinks that the two have been on friendly terms for a while hasn’t been paying attention. After years of needling big business in movies like Roger & Me (about the auto industry) and Sicko (health insurance), and giving voice to the disempowered, he has finally decided to go after the system that, in his words, is dedicated to ‘taking and giving, mostly taking.’” – Manohla Dargis, New York Times

« Short Film: The Story of Electronics
Letting Go of Perfectionism In Health »